Home » Why Is Canola Oil Bad for You?

Why Is Canola Oil Bad for You? 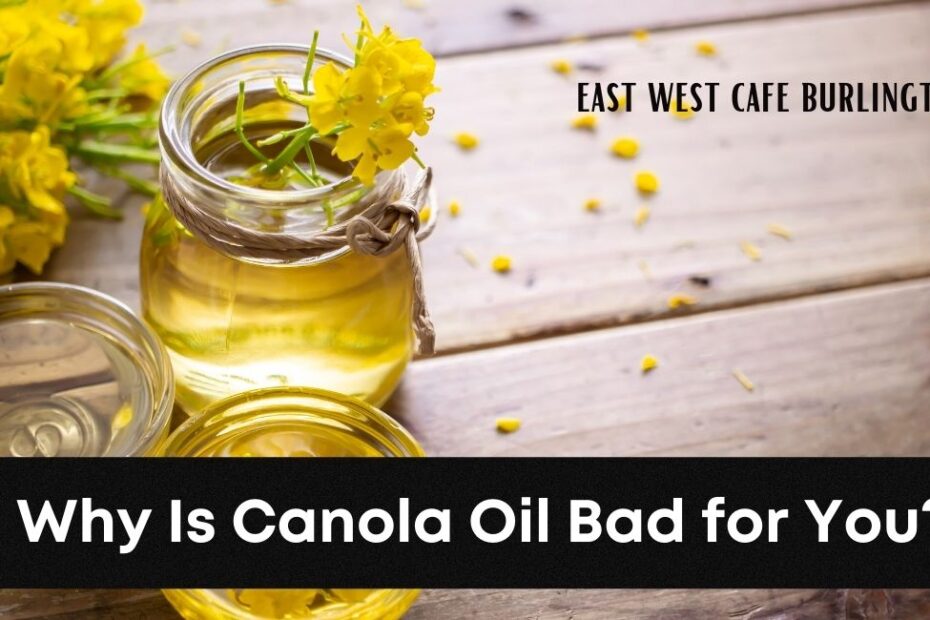 Canola oil has long been regarded as a healthy cooking oil due to its low saturated fat level.

When the low-fat mania died down — and research disproved the idea that saturated fats were to blame for heart disease — canola oil became a contentious topic.

Experts who swear by it and others who advise against it can be found with a fast Google search, so what is the truth?

When you examine closely, you’ll see that canola oil isn’t all it’s cracked up to be. In fact, ingesting it may cause inflammation and have negative impacts on your gut health, among other things. Continue reading to learn why you should stop using this “heart-healthy” oil.

Why Is It Harmful to Your Health?

Canola oil is bad news, despite what the advertising says. Here are seven reasons why you should avoid it.

Canola oil has been hydrogenated.

The oil is termed refined if it is not “cold-pressed” or “extra-virgin.” This process involves high temperatures or chemicals that are harmful to the human body, such as caustic refining, bleaching, and degumming. The deodorization step occurs last but not least.

When exposed to oxygen and high temperatures, canola oil becomes easily rancid and foul-smelling due to its high omega-3 fatty acid content. By converting omega-3 fatty acids to trans-fatty acids, the typical deodorization method removes a major amount of them.

Canola oil is almost entirely made from genetically engineered crops. Genetically modified crops account for more than 90% of all canola oil produced.

Under heat, light, and pressure, canola oil becomes exceedingly unstable, causing oxidation and the release of free radicals inside the body. Butadiene, benzene, acrolein, formaldehyde, and other noxious chemicals are produced when canola oil is heated (i.e. when we cook with it).

These chemical molecules, when paired with an increase in free radicals, create the ideal conditions for cancer to thrive.

While genetic modification has reduced the amount of erucic acid in canola oil, it remains a significant source of the acid. Erucic acid is a monounsaturated fatty acid connected to cardiac disease, particularly Keshan disease (a thickening and scarring of connective tissue within the heart).

Erucic acid levels are higher and selenium levels are lower in locations where people are prone to Keshan, according to studies.

Canola oil is also capable of causing significant amounts of inflammation and arterial calcification in the body. Any partially hydrogenated oil has the potential to do so. Systemic inflammation and calcification, as you might expect, are substantial risk factors for coronary heart disease.

Canola oil harms our cardiovascular system, especially blood pressure, by contributing to inflammation in the body. Canola oil has been shown in studies to reduce the lifespan of stroke-prone and hypertensive animal models.

Children’s Normal Growth May Be Affected

The presence of erucic acid in canola oil was the primary reason for its removal from infant formula. Canola oil contains erucic acid, which is dangerous to newborns due to their inability to break it down effectively. Canola oil was originally prohibited from being used in baby formula by the FDA, however this is no longer the case.

Canola oil was added to the generally recognized as safe list a few years ago, allowing infant formula manufacturers to use as much as they desire in their formula.

Canola oil is a seed oil that is commonly used in food preparation and cooking.

Canola oil study has a lot of contradictory and inconsistent findings.

While some studies show it to be beneficial to your health, others claim it creates inflammation and affects your memory and heart.

Until larger, higher-quality studies are available, it’s probably best to stick with oils that have been established to be healthful, such extra virgin olive oil.

previousDoes Sourdough Bread Have Gluten?
nextHow Can You Tell If an Egg Is Good?